provided by eFloras
This is a cultivated species with many cultivars.

provided by eFloras
Sorghum bicolor is the important, tropical cereal sorghum. Originating in Africa, its cultivation for both grain and fodder spread throughout the tropics and subtropics of the Old World. It was introduced with the slave trade to America, including warm parts of the United States. It is now cultivated throughout most of China.

There is a multiplicity of forms of cultivated sorghum, derived by human selection and all fully interfertile. Some forms have sweet culms. Many species names have been proposed in the past in an attempt to categorize this variation, but they represent no more than intergrading cultivars within the common species pool.

The name Holcus saccharatus Linnaeus (Sorghum saccharatum (Linnaeus) Moench) has been identified as this species, but its application is uncertain (see Davidse & Turland in Taxon 50: 577–580. 2001) and the name has been formally rejected.

The principal races grown in China are as follows.

Cultivated for grain; a primitive type.

Cultivated in Xinjiang for grain and forage.

Culms with sweet juice. Panicle elongate, to 50 cm; branches racemose or corymbose, the lower ones half as long as panicle or more. Sessile spikelets broadly elliptic to obovate; glumes crustaceous, striately veined above middle. Grain elliptic or elliptic-oblong, enclosed by the glumes or only slightly protruding.

Cultivated for grain and forage throughout most of China, including forms used for making brooms.

provided by eFloras
Cultivated in China [native to Africa; widely cultivated in the tropics].

Sorghum bicolor, commonly called sorghum[2] (/ˈsɔːrɡəm/) and also known as great millet,[3] durra, jowari / jowar, or milo, is a grass species cultivated for its grain, which is used for food for humans, animal feed, and ethanol production. Sorghum originated in Africa, and is now cultivated widely in tropical and subtropical regions.[4] Sorghum is the world's fifth-most important cereal crop after rice, wheat, maize, and barley, with 59.34 million metric tons of annual global production in 2018.[5] S. bicolor is typically an annual, but some cultivars are perennial. It grows in clumps that may reach over 4 m high. The grain is small, ranging from 2 to 4 mm in diameter. Sweet sorghums are sorghum cultivars that are primarily grown for forage, syrup production, and ethanol; they are taller than those grown for grain.[6][7]

Sorghum bicolor is the cultivated species of sorghum; its wild relatives make up the botanical genus Sorghum. 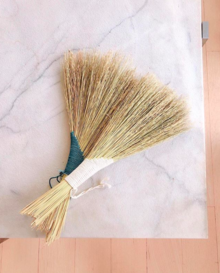 Two 'turkey tail' style brooms made from broom corn
Seed head of sorghum in India
Sorghum with a recurved peduncle trait, Turpan basin, Xinjiang, China. In some varieties and in certain conditions, the heavy panicle will make the young soft peduncle bend, which then will lignify in this position. Combined with awned inflorescence, this forms a two-fold defence against birds.

Sorghum grain cannot be consumed unless the indigestible husk is removed. During the transatlantic slave trade, "the only way to remove the husk was by hand, with mortar and pestle."[9] Enslaved women did most of the work in preparing the sorghum and were tasked with cleaning the grain and turning it into flour.[9]

The first archaeological remnants of sorghum are at Nabta Playa on the Upper Nile, c. 8000 BC. However, these are wild sorghum, with small grains and a brittle rachis. Sorghum is believed to have been domesticated from the wild Sorghum arundinaceum in perhaps 7000–5000 BC in the Niger River valley.[10][11][12] Botanists divide it into five "races":

Sorghum in the United States was first recorded by Ben Franklin in 1757.[14]

Richard Pankhurst reports (citing Augustus B. Wylde) that in 19th-century Ethiopia, durra was "often the first crop sown on newly cultivated land", explaining that this cereal did not require the thorough ploughing other crops did, and its roots not only decomposed into a good fertilizer, but they also helped to break up the soil while not exhausting the subsoil.[15]

In 19th century European accounts, many would use the term "millet" to refer to both pearl millet and sorghum. Milho, in Portuguese references was used to refer to both maize and sorghum, and researchers suspect this is because their vegetative cycle is so similar. Although, when sorghum matures it produces a tassel of exposed grains, which differs from maize which produces a husk. In European accounts, it is hard to tell if they are referring to maize, millet, or sorghum. All of these crops were grown in Africa and sold on slave ships.[9]

Sorghum is cultivated in many parts of the world today.[8] The grain finds use as human food, and for making liquor, animal feed, or bio-based ethanol. Sorghum grain is gluten free, high in resistant starch, and more abundant and diverse phenolic compounds compared to other major cereal crops[16][17]

In many parts of Asia and Africa, sorghum grain is used to make flat breads that form the staple food of many cultures.[18][19] The grains can also be popped in a fashion similar to popcorn.

In India, where it is commonly called jwaarie, jowar, jola, or jondhalaa, sorghum is one of the staple sources of nutrition in Rajasthan, Punjab, Haryana, Uttar Pradesh, and the Deccan plateau states of Maharashtra, Karnataka, and Telangana. An Indian bread called bhakri, jowar roti, or jolada rotti is prepared from this grain.[20][21]

In Tunisia, where it is commonly called droô, a traditional porridge dish is prepared with ground sorghum grains powder, milk and sugar. The dish is a staple breakfast meal consumed in winter months.[22]

Sweet sorghum syrup is known as molasses in some parts of the U.S., although it is not true molasses.

In Southern African countries, Sorghum, along with milk, sugar and butter, is used to make Maltabella, a variation of millet porridge.

In China, sorghum is known as gaoliang (高粱), and is fermented and distilled to produce one form of clear spirits known as baijiu (白酒) of which the most famous is Maotai (or Moutai). In Taiwan, on the island called Kinmen, plain sorghum is made into sorghum liquor. In several countries in Africa, including Zimbabwe, Burundi, Mali, Burkina Faso, Ghana, and Nigeria, sorghum of both the red and white varieties is used to make traditional opaque beer. Red sorghum imparts a pinkish-brown colour to the beer.[24]

In Australia, South America, and the United States, sorghum grain is used primarily for livestock feed and in a growing number of ethanol plants.[25] In some countries, sweet sorghum stalks are used for producing biofuel by squeezing the juice and then fermenting it into ethanol.[26] Texas A&M University in the United States is currently running trials to find the best varieties for ethanol production from sorghum leaves and stalks in the USA.[27]

It is also used for making a traditional corn broom.[28] The reclaimed stalks of the sorghum plant are used to make a decorative millwork material marketed as Kirei board.

It is used in feed and pasturage for livestock. Its use is limited, however, because the starch and protein in sorghum is more difficult for animals to digest than the starches and protein in corn. Research is being done to find a process that will predigest the grain. One study on cattle showed that steam-flaked sorghum was preferable to dry-rolled sorghum because it improved daily weight gain.[8] In hogs, sorghum has been shown to be a more efficient feed choice than corn when both grains were processed in the same way.[8]

The introduction of improved varieties, along with improved management practices, has helped to increase sorghum productivity. In India, productivity increases are thought to have freed up six million hectares of land. The International Crops Research Institute for the Semi-Arid Tropics in collaboration with partners produces improved varieties of crops including sorghum. Some 194 improved cultivars of sorghum from the institute have been released.[29]

Weedy races of S. bicolor are known as shattercane.[30]

Research is being conducted to develop a genetic cross that will make the plant more tolerant to colder temperatures and to unravel the drought tolerance mechanisms, since it is native to tropical climates.[31][32] In the United States, this is important because the cost of corn was steadily increasing due to its use in ethanol production for addition to gasoline.

Sorghum silage can be used as a replacement of corn silage in the diet for dairy cattle.[33] More research has found that sorghum has higher nutritional value compared to corn when feeding dairy cattle, and the type of processing is also essential in harvesting the grain's maximum nutrition. Feeding steam-flaked sorghum showed an increase in milk production when compared to dry-rolling.[33]

Additional research is being done on sorghum as a potential food source to meet the increasing global food demand. Sorghum is resistant to drought- and heat-related stress. The genetic diversity between subspecies of sorghum makes it more resistant to pests and pathogens than other less diverse food sources. In addition, it is highly efficient in converting solar energy to chemical energy, and also in use of water.[34] All of these characteristics make it a promising candidate to help meet the increasing global food demand. As such, many groups around the world are pursuing research initiatives around sorghum (specifically Sorghum bicolor): Purdue University,[35] HudsonAlpha Institute for Biotechnology,[34] Danforth Plant Science Center,[34] the University of Nebraska,[36] and the University of Queensland[37] among others. The University of Queensland is involved with pre-breeding activities, which are extremely successful and stillare in progress using crop wild relatives as donors along with popular varieties as recipients to make sorghum more resistant to biotic stresses.

Another research application of sorghum is as a biofuel. Sweet sorghum has a high sugar content in its stalk, which can be turned into ethanol. The biomass can be burned and turned into charcoal, syn-gas, and bio-oil.

Sorghum is a host of the parasitic plant Striga hermonthica.[41] This parasite is a devastating pest on the crop. The European corn borer (Ostrinia nubilalis) was introduced to North America by transport of infested sorghum broom corn.[42]

The following pest species are reported for sorghum crops in northern Mali.[43]

Sorghum bicolor, commonly called sorghum (/ˈsɔːrɡəm/) and also known as great millet, durra, jowari / jowar, or milo, is a grass species cultivated for its grain, which is used for food for humans, animal feed, and ethanol production. Sorghum originated in Africa, and is now cultivated widely in tropical and subtropical regions. Sorghum is the world's fifth-most important cereal crop after rice, wheat, maize, and barley, with 59.34 million metric tons of annual global production in 2018. S. bicolor is typically an annual, but some cultivars are perennial. It grows in clumps that may reach over 4 m high. The grain is small, ranging from 2 to 4 mm in diameter. Sweet sorghums are sorghum cultivars that are primarily grown for forage, syrup production, and ethanol; they are taller than those grown for grain.

Sorghum bicolor is the cultivated species of sorghum; its wild relatives make up the botanical genus Sorghum.