Lophelia pertusa, the only species in the genus Lophelia,[2][3] is a cold-water coral which grows in the deep waters throughout the North Atlantic ocean, as well as parts of the Caribbean Sea and Alboran Sea.[4] L. pertusa reefs are home to a diverse community, however the species is extremely slow growing and may be harmed by destructive fishing practices, or oil exploration and extraction.

As a coral, it represents a colonial organism, which consists of many individuals. New polyps live and build upon the calcium carbonate skeletal remains of previous generations. Living coral ranges in colour from white to orange-red. Unlike most tropical corals, the polyps are not interconnected by living tissue. Each polyp has up to 16 tentacles and is a translucent pink, yellow or white. Some colonies have larger polyps while others have small and delicate -looking ones.[5] Radiocarbon dating indicates that some Lophelia reefs in the waters off North Carolina may be 40,000 years old, with individual living coral bushes as much as 1,000 years old.

The colony grows by the budding off of new polyps. Living polyps are present on the edges of dead coral and fragmentation of coral colonies provides one form of asexual reproduction. Each colony is either male or female and sexual reproduction occurs when these liberate sperm and oocytes into the sea. The larvae do not have a feeding stage, but sustain themselves on their yolks and drift with the plankton, possibly for several weeks. On settling on the seabed, they undergo metamorphosis and develop into polyps which potentially start new colonies.[5]

Polyps at the end of branches feed by extending their tentacles and straining plankton from the seawater. The spring bloom of phytoplankton and subsequent zooplankton blooms, provide the main source of nutrient input to the deep sea. This rain of dead plankton is visible on photographs of the seabed and stimulates a seasonal cycle of growth and reproduction in Lophelia. This cycle is recorded in patterns of growth, and can be studied to investigate climatic variation in the recent past.

L. pertusa was listed under CITES Appendix II in January 1990, meaning that the United Nations Environmental Programme recognizes that this species is not necessarily currently threatened with extinction but that it may become so in the future. CITES is technically a means of restricting international trade in endangered species, which is not a major threat to the survival of L. pertusa. The OSPAR Commission for the protection of the marine environment of the North-East Atlantic have recognised Lophelia pertusa reefs as a threatened habitat in need of protection.

Main threats come from destruction of reefs by heavy deep-sea trawl nets, targeting redfish or grenadiers. The heavy metal "doors" which hold the mouth of the net open, and the "footline", which is equipped with large metal "rollers", are dragged along the sea bed, and have a highly damaging effect on the coral. Because the rate of growth is so slow, it is unlikely that this practice will prove to be sustainable. 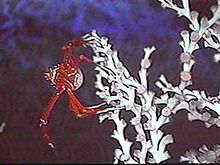 A squat lobster living on a Lophelia reef

Scientists estimate that trawling has damaged or destroyed 30%–50% of the Norwegian shelf coral area. The International Council for the Exploration of the Sea, the European Commission’s main scientific advisor on fisheries and environmental issues in the northeast Atlantic, recommend mapping and then closing all of Europe’s deep corals to fishing trawlers.[7]

In recent years, environmental organisations such as Greenpeace have argued that exploration for oil on the north west continental shelf slopes of Europe should be curtailed due to the possibility that is it damaging to the Lophelia reefs - conversely, Lophelia has recently been observed growing on the legs of oil installations,[8] specifically the Brent Spar rig which Greenpeace campaigned to remove. At the time, the growth of L. pertusa on the legs of oil rigs was considered unusual, although recent studies have shown this to be a common occurrence, with 13 of 14 North Sea oil rigs examined having L. pertusa colonies[1]. The authors of the original work suggested that it may be better to leave the lower parts of such structures in place — a suggestion opposed by Greenpeace campaigner Simon Reddy, who compared it to "[dumping] a car in a wood – moss would grow on it, and if I was lucky a bird may even nest in it. But this is not justification to fill our forests with disused cars".[2]

Lophelia beds create a specialised habitat favoured by some species of deep water fishes. Surveys have recorded conger eels, sharks, groupers and hake. The invertebrate community consists of brittle stars, molluscs, amphipods and crabs. High densities of smaller fish such as hatchetfish and lanternfish have been recorded in the waters over Lophelia beds, indicating they may be important prey items for the larger fish below.

Lophelia pertusa, the only species in the genus Lophelia, is a cold-water coral which grows in the deep waters throughout the North Atlantic ocean, as well as parts of the Caribbean Sea and Alboran Sea. L. pertusa reefs are home to a diverse community, however the species is extremely slow growing and may be harmed by destructive fishing practices, or oil exploration and extraction.