The female yellowthroat lays her eggs between April and July, and incubates 3-5 eggs for 12 days. The eggs are white or cream-white and are speckled brown, black, or grey at the large end. The cup-shaped, bulky nest made from dead leaves, coarse grass and weed stems, with a lining of fine black rootlets, is located low to the ground, in shrubbery. While only the female incubates the eggs, both the male and female tend the young. The young are altricial and leave the nest 8 days after hatching (Ehrlich et al. 1988; Fisher and Acorn 1998; Terres 1980; Tufts 1986).

Both the appearance (especially of the males) and the vocalizations of the Common Yellowthroat are very striking. They are so characteristic of wetland habitats that they provide a distinguished presence to these areas (Fisher and Acorn 1998).

There has been a general decline in neotropical migrants. However, the yellowthroat is a very common species of wood warbler and the only threats to its status may be the parasitism of cowbirds and the possibility of habitat loss from development of open areas or wetlands.

The Common Yellowthroat has no known negative impact on humans.

Yellowthroats are a pleasant addition to the variety of sights and sounds of wetlands.

They eat many different species of insects, some of which may pose as pests to humans.

The yellowthroat is generally an insectivore. It gleans leaves of shrubbery, grasses or weeds for adult and larval insects such as grasshoppers, dragonflies, beetles, butterflies, and spiders. Seeds are sometimes eaten as well (Fisher and Acorn 1998; Terres 1980).

Geothlypis trichas nest in Alaska and from the Atlantic Ocean to the Pacific Ocean across Canada and the United States. They also nest further south into Mexico. Their wintering range is from southern United States to northern South America and into the West Indies (Terres 1980; Versaware 2000).

Common Yellowthroats occupy non-forested areas low to the ground in briers, damp brushy places, weeds or grasses along country roads or agricultural environments. They are also found in cattails, bulrushes, sedges, and willows by streamsides, swamps, freshwater, and salt-water marshes. They occupy similar types of habitats for both their breeding and wintering locations (Fisher and Acorn 1998; Rogers 2000; Terres 1980).

Common Yellowthroats are wren-like wood warblers with upturned tails. They are 11 to 14 cm in length. The males are olive green above and have a year round black facial mask, bordered above by a blue-white band. They have a white belly with pale yellow chin, throat, breast, and undertail coverts. The beak is black and the legs are a pinkish color. The females look similar to the males but lack the black facial mask. Immature yellowthroats are dull brown with the males' face showing a drab facial mask (Rogers 2000; Terres 1980; Tufts 1986).

provided by EOL authors
The Common Yellowthroat (Geothlypis trichas) is a common breeding bird across most of North America, from Canada south through Mexico, with a winter range extending from the southern United States to northern South America.. Common Yellowthroats tend to stay low in grassy fields, thickets, and marshes. They breed most abundantly in marshes (especially cattails) and other very wet habitats with low, dense growth. During migration and in winter they are less closely associated with marshes and may occur in any sort of brushy or wooded area. The diet of the Common Yellowthroat consists mainly of insects and spiders, but includes some seeds. During courtship, the male displays to the female by flicking his wings and tail, following her closely, and performing a flight display in which he may climb up to 30 m in the air and returns to another low perch, calling and singing. Common Yellowthroats generally nest less than a meter from the ground. The nest is a bulky open cup built by the female and sometimes has a partial roof of material loosely attached to the rim. There are typically 3 to 5 (sometimes 6) eggs, which are creamy white with brown and black spots. The eggs are incubated (by the female only) for 12 days. The male feeds the female on the nest during incubation. Young are fed by both parents and leave the nest after 8 to 10 days. There are typically two broods per year. The young remain dependent on their parents for longer than most other wood warblers. Common Yellowthroats are very commonly "parasitized" by Brown-headed Cowbirds, which are "brood parasites", laying their eggs in the nests of birds of other species in lieu of building their own. Migration occurs mainly at night and in many areas is spread over a long period in both spring and fall. Despite habitat loss that has surely led to local declines, the Common Yellowthroat remains a common and widespread species in the United States and Canada. (Kaufman 1996; AOU 1998; Dunn and Alderfer 2011)

The common yellowthroat (Geothlypis trichas) is a New World warbler. It is an abundant breeder in North America, ranging from southern Canada to central Mexico. The genus name Geothlypis is from Ancient Greek geo, "ground", and thlupis, an unidentified small bird; thlypis is often used in the scientific names of New World warblers. The specific trichas is also from Greek; trikhas is a kind of thrush, the word being derived from trikhos, "hair".[2] 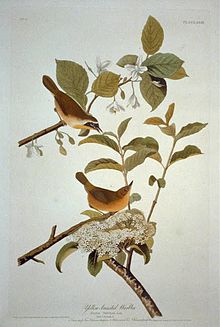 Common Yellowthroat in Birds of America

Common yellowthroats are small songbirds that have olive backs, wings and tails, yellow throats and chests, and white bellies. Adult males have black face masks which stretch from the sides of the neck across the eyes and forehead, which are bordered above with white or gray. Females are similar in appearance, but have paler underparts and lack the black mask. Immature birds are similar in appearance to the adult female. First-year males have a faint black mask which darkens completely by spring.[3]

There are 13 races of this bird. These races differ mainly in the males' facial patterns and the brightness of the yellow underparts. The southwestern forms of this bird are the brightest and the yellowest below.[4]

The breeding habitats of these birds are marshes and other wet areas with dense low vegetation, and may also be found in other areas with dense shrub. However, these birds are less common in dry areas. Females appear to prefer males with larger masks. Common yellowthroats nest in low areas of the vegetation, laying 3–5 eggs in a cup-shaped nest. Both parents feed the young.[5]

Northern races are nocturnal migrants,[5] wintering in the southern parts of the breeding range, Central America and the West Indies. Southern forms are largely resident. This species is a very rare vagrant to western Europe.

These birds feed on insects, which are usually captured in dense vegetation, but sometimes caught in midair.[5]

Despite a decline in numbers in some areas, which is due to loss of favoured habitat, this species is still very common.

Routes of migration vary based on the season and location of common yellowthroats. During fall migration, from August to October, common yellowthroats in Canada, Western, Eastern, and Central U.S., and regions outside of the United States all have unique migration routes. When migrating in the fall months, all adults and immature individuals tend to arrive at their migration destinations around the same time. Migration differences in timing and routes are also seen during the spring months from early February to late May in these same groups across the United States, Canada, and other areas. However, males generally arrive at their destination site before the females during the spring migration months. During both fall and spring migration, many birds take time to rest during a stopover period. Some individuals stay at their stopover destinations for several weeks or months while others spend only a few days resting before they continue on in their migration patterns to their final destination.[5]

One place of study on common yellowthroat migration that is unique and worth noting is Appledore Island, Maine. Common yellowthroats here typically migrate to this island during the spring months displaying distinct patterns of movement and stopover ecology. Analysis of the common yellowthroat spring migration from April to June was observed by researchers from the Department of Biology at Canisius College in Buffalo, New York, to determine patterns of migration and time spent resting on the island before continuing on their journey. Birds returning for more than the second time arrive earlier than birds migrating to the island for their first time. Every year, males tend to arrive on the island an average of five days earlier than females weighing more than the females upon arrival. One possible explanation for the early arrival of males to this island is the ability of males to set up territories before the females arrive. This could give them better access to resources and a higher likelihood of finding a female. However, both sexes spend about a week on the island before leaving.[6]

Migration of common yellowthroats in Florida has also been extensively studied. In Florida, the common yellowthroat can be found more often in the southern peninsular region rather than the northern panhandle region closer to the mainland of the United States. Peak migration times of the birds in this region are during the last week of September through the second week of October. Not as much is known about spring migration in Florida, but the patterns appear similar to that of the autumn migration.[7]

Future studies are needed to understand specific migration patterns of common yellowthroats in other parts of the United States.

The common yellowthroat (Geothlypis trichas) is a New World warbler. It is an abundant breeder in North America, ranging from southern Canada to central Mexico. The genus name Geothlypis is from Ancient Greek geo, "ground", and thlupis, an unidentified small bird; thlypis is often used in the scientific names of New World warblers. The specific trichas is also from Greek; trikhas is a kind of thrush, the word being derived from trikhos, "hair".